AND NONE FOR GRETCHEN WIENERS

As you know, I was the recipient of a tremendous award this past weekend.

And by "tremendous," I mean in both size and prestige.

This was a Big Deal for me.

So I was looking forward to see the photos that were taken that night by our racing series' Official Photographer.

Until I saw the one picture he took of me.

My hair looked great, by the way.

*I* looked great, by the way.  Makeup and everything!


Not that you'll see it.  Because the only way I could get a copy of the picture of my back is if I were to buy it.

What made the lack of a photo even more galling was that everyone else who received a Merit Award had their picture taken.  You know, "Stand there, hold up your award and Smile!"

I feel like Gretchen Weiners when she didn't get a candy cane but there was four for Glen Coco (you go, Glen Coco!)


Pity, Party of One!  Your table is ready!

Posted by Kelly at 11:50 AM No comments: Links to this post

Okay, so back in the tail end of October, I made a decision to join Weight Watchers.

This decision came about when I stepped on the rotted out subfloor during our kitchen remodel and fell through.


And someone witnessed it.


And that someone made a not-so-funny but legitimate crack about my weight.

And tears of anger, frustration and humiliation were shed.

And that was when I knew it was Time.


And since I had already done two tours of duty with WW with minimal results (MY fault and not the program's), I said to myself, "Hey, third time's the charm!"


So off I went, where I stepped on the scale, whimpered and forged ahead.


So far I've lost 15lbs and I've only missed one meeting (I had flu cooties).


A couple of weeks ago, our Leader presented a Tracker notebook 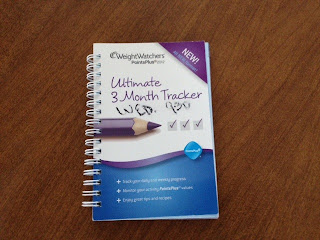 and asked that each week, one member takes it home and and tracks her Points Plus, Activity, etc.  You know, journal. 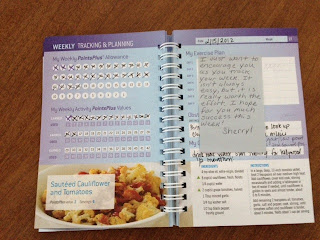 This week, I volunteered to be the Keeper of the Tracker for two reasons.

B.  I've kind of slacked off (kind of???) and needed a kick in the pants to get back on track.


So of COURSE I had Crack for breakfast.


But I was honest and I DID write it in the journal.


And felt shame, as well I should.


The girl who kept it last week said to me as she handed it over, "Don't judge me!"

And at my meeting today, I also decided to splurge on a pedometer and I am bound and determined to get my 10K steps a day in.

I do have a long-term goal:  to do the Long Beach Marathon in October.

Okay, the HALF Marathon.

And walking, not running because have you SEEN my chest?  SO not made for jogging.  Someone would lose an eye.

Posted by Kelly at 1:19 PM 2 comments: Links to this post

DON'T MESS WITH MY TOOT TOOT!

What's that sound you hear?  It's me, tooting my own horn.

Why am I tooting my own horn, you ask?

Guess who was selected for the highest honor in my racing organization, AMA District 37, for her contribution to the sport? 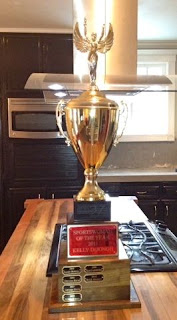 Can't quite make out the name on that 3' and change tall trophy? 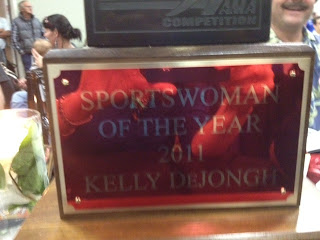 I KNOW!!!
It really is a huge honor because the recipient (that would be ME!) has to be nominated and then the entire organization has to vote and I didn't even know I had been nominated until a few days prior and my flabber was more than gasted when they announced my name.
I really wanted to kiss the trophy, raise it over my head and do a Stanley Cup Victory Lap. 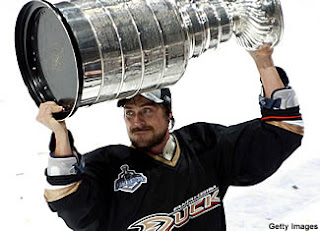 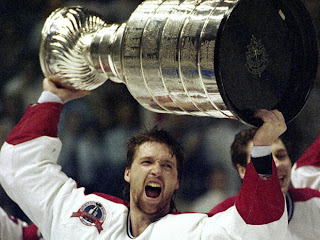 But that probably wouldn't have gone over very well with the crowd.  Especially the other nominees.
And OF COURSE I had to rub it in to Thing 1, who couldn't be bothered to attend the award ceremony (because "it's so boring!"), that MY trophy is bigger than anything HE has ever won.
Because who is a Gracious Winner?
Not his Mother.
Now my big problem is finding a place to put this massive, and massively heavy trophy.  Currently, it's sitting on my kitchen island so that all visitors can't help but see it and know that they are in the presence of Greatness.
Because who's modest and humble?
Not This Gal!
Oh!  I totally need to take my trophy wherever I go and take pictures.  Dinner, the supermarket, the park, etc.  It'll be awesome!
*The AMA District 37 Sportswoman of the Year is available for (paid) personal appearances, children's parties, Bar and Bat Mitzvah celebrations, photo and autograph sessions, motivational speaking engagements and attendance at hockey games.

Posted by Kelly at 1:04 PM 2 comments: Links to this post