I want some Whine

TheManTheMyth is on the Injured Reserved List this week folks.  And that means, MY life is not the days of Wine and Roses which is actually okay because I do not partake of the nectar of the grape.

In other words, I don't drink wine.

The only time I'll drink wine is if I'm at a charity function and it's on the table and even then, I'll just have a few sips and that's it.

TheManTheMyth is having serious back problems this week.  About every 7 to 10 years, his back will seize up on him and when he can actually walk, he kind of holds on to any piece of furniture while bending at the waist.

I asked him if he needed a walker with tennis balls on the legs.

He was not amused.

So yesterday I took him to the chiropractor.  While I was waiting for him to get adjusted and manipulated in the hopes it would help, I sat in one of those massage chair recliner things and turned it on.

Today, I feel like I've been beaten with a baseball bat.

I won't be getting one of those chairs any time soon.

This morning, though, TheManTheMyth is feeling a little bit better and is moving around easier which means everybody is breathing a sigh of relief.  None of us wanted to have to help him to the bathroom.  I mean, there was nothing in our wedding vows about assisting in the bathroom.  I know, I checked.

Oh, and SPEAKING of bathrooms, I've often complained about my wimpy shower head with the water pressure of a dime store squirt gun.  Well guess what?  I had to touch up my roots yesterday (What?  You thought I was a natural redhead?) and it was time to rinse off the hair color so I turned on the shower and HOLY CHIT!  Somehow, suddenly we've got water pressure.  And lots of it.  It's Fire Hose water pressure.  The slate tiles on the shower walls were chipping due to the intense pressure.  I am not joking.  It was scary.

I lost several layers of skin.  I've never felt so clean in my life.

In other news, Gracie Lou now considers herself a Great White Hunter.  We were at the park and she had stopped behind me to sniff something in the grass while I walked on ahead of her.  Whenever she finds a discarded food wrapper she does the following:

So when I saw her Sniff, Fling THEN Run, I turned just in time to see the gopher land on the ground behind me.

At the same time she had been sniffing at a gopher hole, the gopher had decided to stick its head out to see what was going on in the world and Gracie was all, "Oh Boy!" and the gopher was all, "FUCK."

It was pretty pissed off, to say the least, and made lunging motions toward us and Gracie was lunging back and the gopher was all, "Come ON!  Bring it!" while dropping its little gopher sized gloves.

I pulled Gracie away from the fight and we watched the gopher back up, flip us off and then turn and head back into the grass, muttering expletives at us as he left.

For the rest of our walk, The Great White Hunter was strutting and being all BadAss because she had caught a gopher.

Perhaps this is why TheManTheMyth has problems with his back: 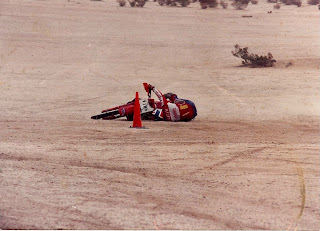